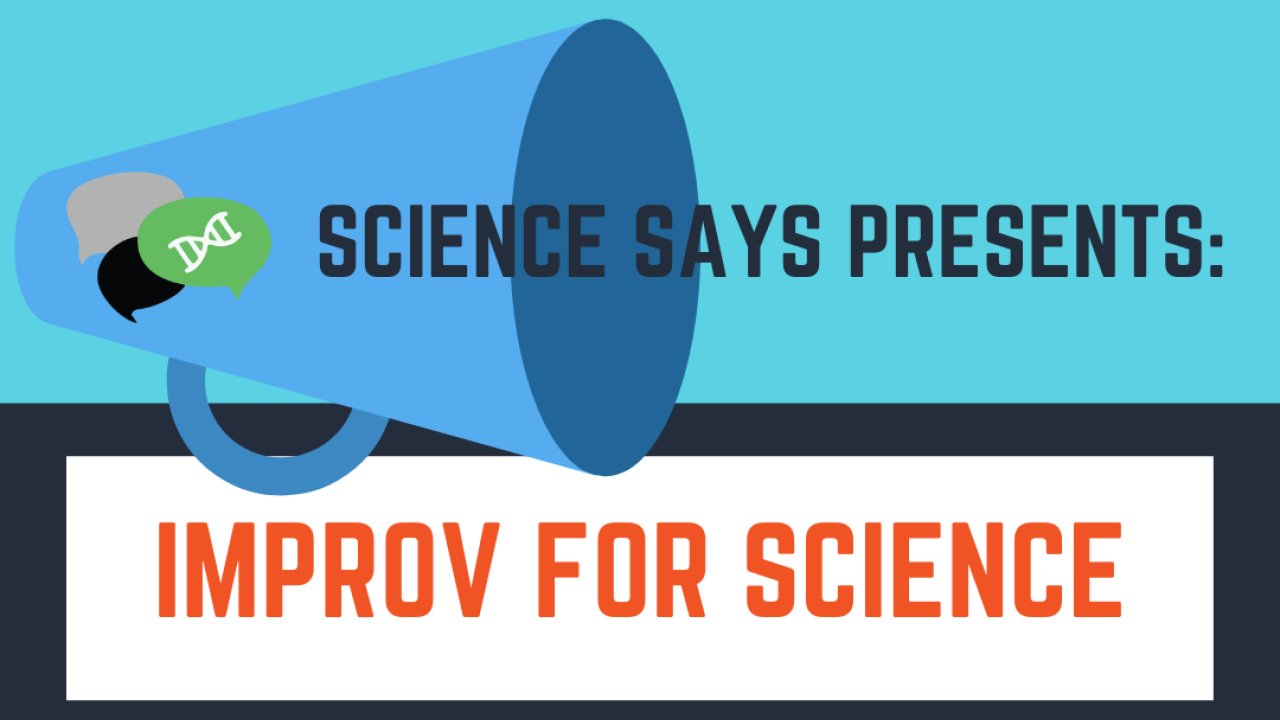 Key Takeaways from Improv for Science

This February, Lucas Hatton led us through a two-part improvisational theater, or improv, workshop where we participated in improv games to learn two key skills: active listening and spontaneity. As scientists, these skills are important for every communication opportunity: we must listen and adapt quickly to communicate effectively with a given audience. If you missed the workshop, I highly recommend participating in the future.

Lucas led several activities that taught us to listen actively, my favorite being the “Yes, And” exercise. One person would initiate a scene with a statement, and the second person would have to say “Yes, and…” to build on what the first person said. That exchange would continue until Lucas called “Scene!” We had to really pay attention to what the other person said in order to keep the scene from stalling or not making sense. A scene I was in started like this:

Me: *cough* I don’t feel so good; I must be coming down with something.

Scene Partner: Yes, and were you at the bar last night? You could have caught the Corona Beer.

Given that coronavirus is a hot conversation topic, I was expecting my scene partner’s response to include coronavirus. Instead, “Corona Beer” caught me off guard and made the scene challenging to continue. I had to adapt to the situation, and focus my response on what they’d actually said, not what I thought they would say.

The ability to build upon the statements of others is very important in all conversations. Conversationalists support each other through active listening and make the other feel heard, and this allows people to have deeper and more meaningful discussions. In science communication, we actively listen to our audience in order to address their concerns; this makes them feel supported and heard, and then we can communicate the answer in a way that doesn’t make them feel attacked or inferior. For more on scientists’ experiences with the “Yes, And” exercise, check out this Science article.

In another activity, we were asked to give our two-minute research pitch to the group. During the pitch Lucas would yell out, “simpler!” prompting us to rephrase what we just said using simpler language (i.e. less scientific jargon). This disrupted our practiced, potentially monotonous way of describing our work. It made us spontaneously come up with new content, which resulted in a positive reaction from the audience and renewed energy in the speaker. Lucas noted down all of the statements that followed his “simpler” command and shared with us which ones really connected with the audience.

His point? Spontaneity is more exciting than a rehearsed speech. While practicing our message is important so that we spread scientifically sound information, we also need to be flexible to spontaneously talk about our work with the public, responding to their potential concerns and questions.

Thank you to Lucas Hatton for directing this workshop and sharing his insights.

Sydney Wyatt is a PhD student at the University of California in Davis.  For more content from the UC Davis science communication group "Science Says", follow us on Twitter @SciSays.