Professor Sir Charles Godfray: The Future of Food Giving Us Food for Thought

Insects are the subject of fear for many, but not for Professor Sir Charles Godfray. Dr. Godfray developed an interest in entomology at the age of 8 that has only grown over the decades. As the Hope Professor of Zoology at Jesus College in Oxford, Dr. Godfray has partaken in both pure and applied research. He is currently interested in food and food security and how they relate with economics and anthropology. While Dr. Godfray is able to adjust do his thing at his entomology lab, he also participates in other projects spanning different fields. One of his favorite work perks is having the excuse to knock on the door of a social scientist or economist and engage with his or her way of thinking about things. 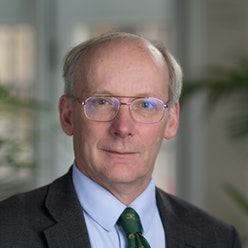 Ten years ago, Dr. Godfray was asked to lead a project: the Oxford Martin Programme on the Future of Food. This project raises questions about the science and policy issues that global governments must grapple with as population and food sources evolve. Dr. Godfray is proud of this well-resourced project and is excited about its interdisciplinary nature. Dr. Godfray is also involved with another large interdisciplinary funding group called the Wellcome Trust. The rising consumption of meat and dairy is the fastest changing component in the world's food system and is especially stark in China. Producing meat requires more resources, such as water, land, and waste management. How will these environmental footprints change? What are some of the health implications of eating red meat? Dr. Godfray and his team will explore these outcomes in a socioeconomic context. The work of Dr. Godfray and other food systems researchers will be paramount in directing how society handles transforming populations and economies. To be successful, it will be crucial to obtain scientific information while avoiding biases from lobbyists. Since people care so much about food, there will be groups that lobby very strongly for one particular view.

"One of the hardest things is that it's such a complicated world with people quoting different evidence and there are relatively few systematic reviews or meta-analyses." - Dr. Godfray

For example, groups in both the US and the UK are making enormous claims about what raising cattle can do to carbon sequestration (the storage of carbon dioxide) in soil, falsely stating that meat production is beneficial for the environment (read the counter-evidence here). Now, it has almost become a social movement, rather than an evidence-based field. Though facts are not absolutely clear in many other cases, policy must be implemented by integrating information with personal value judgments and weighing the benefits that different stakeholders will get. Dr. Godfray has outlined a few important questions to deliberate on if we ultimately do decide that it makes sense to shift diets in one direction:

It will certainly be interesting to see if/how these shifts come to fruition and how society will respond. In addition to conducting beneficial research, outreach is an important part of Dr. Godfray's agenda. He believes we should prioritize improving information access, especially in the area of food systems, since it is both complex and highly contested. Dr. Godfray emphasizes the need for more trusted sources of information. In his opinion, universities should be improving on institutionally providing information. Here, one may consider a consortium of universities getting together, looking at the evidence, being honest about the data, and presenting it to the public in an effective and efficient manner.

So, what's next? Dr. Godfray believes that the development of a global source of protein – artificial meat made from plants or cultured in lab – is up-and-coming. This is a hyped, developing area, where many people are trying to make profits with startups. Read this TIME article for more information about the details of artificial meat. Dr. Godfray expects that we will likely see exciting, genuinely disruptive food products in the next decade.

This technology raises its own questions about health and environmental implications, as well as interesting social science questions. How will this play out in the public sphere if people are given a burger purely out of plant material? Is this cool or is this "fake food" or maybe somewhere in between? Another popular food trend you may have heard about is sourcing protein from bugs. There are parts of the world, especially in Africa, where people eat bugs as part of their diet. In the future, Dr. Godfray predicts that insects will be increasingly used as proteins for animal feeds. Technology seems to be maturing in that area (check out Insects as Feed in West Africa's site to learn more).

In his free time, Dr. Godfray is a self-proclaimed fanatical natural historian and also enjoys music and opera. He enjoys spending time with his art-loving wife and states that it is refreshing to be married to someone that isn't a scientist. Very recently, Dr. Godfray received the great honor of being knighted. When asked about how the experience was when he found out, he described it as "bizarre and very nice, but [he] always feel embarrassed talking to Americans about it, a very, very funny feeling." Kind and humble, Dr. Godfray is a role model to the scientists of the world. He has provided his two most important pieces of advice for developing scientists:

What Happens to Science When the Government Shuts Down?