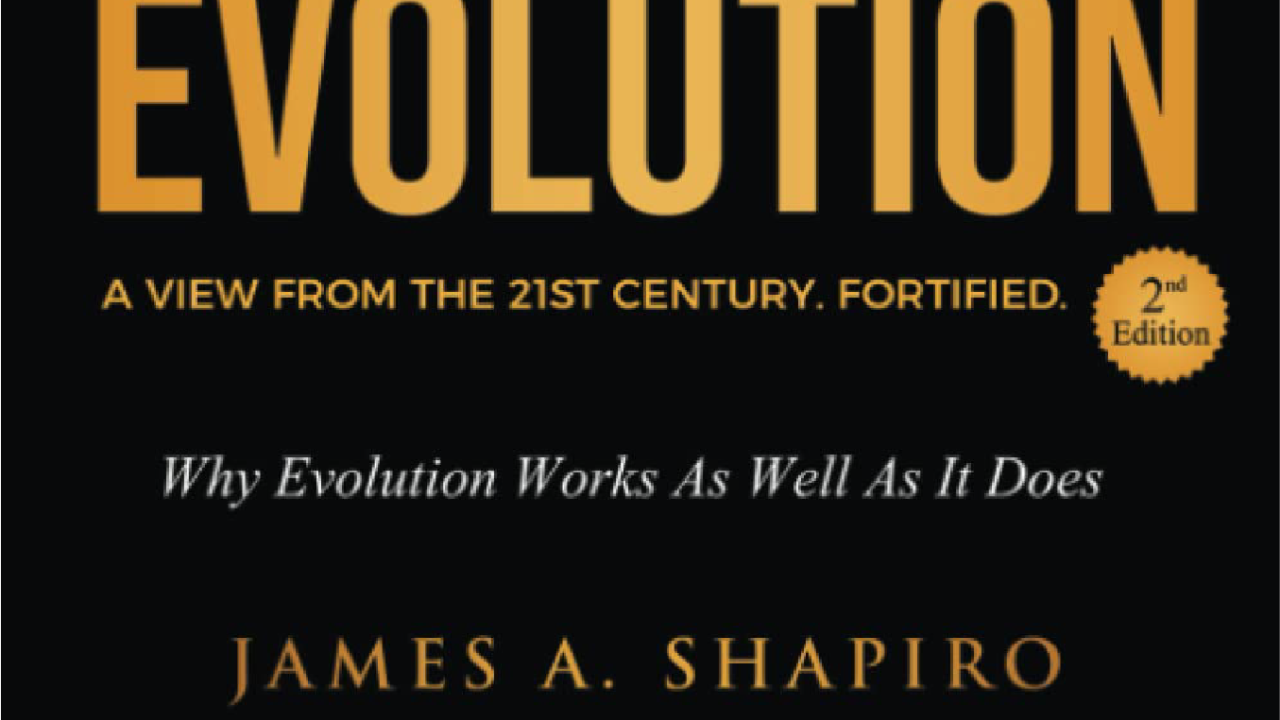 A Discussion with University of Chicago Molecular Biologist James Shapiro

Darwin’s theory of evolution is well-known: organisms produce offspring who differ from each other, and those offspring who are best adapted to their environment are the most likely to survive and reproduce. According to University of Chicago professor James Shapiro, this theory needs to be updated. He details his genomics-based ideas in the just recently published 2nd edition his book Evolution: A View from the 21st Century, Fortified.

This modern theory of evolution has come about largely thanks to the ability to sequence genomes. Scientists are observing biological change at a much more rapid pace than we would expect from random recombination, mutation and natural selection. This is due to organisms’ having a much greater capacity to rearrange their genomes and exchange segments of DNA than previously thought.

These swift evolutionary processes can occur when organisms are under stress or when they mate outside their species, suggesting that they are adapting to challenges in their environment. Researchers are now observing the evolution of several new species within just a few generations in places such as the Galapagos Islands.

Barbara McClintock’s work in the 1940s, in particular her discovery of transposable elements — pieces of DNA that “jump” to a new location — began pointing to a new understanding of genetic evolution. Shapiro says that modern genomics has taken us even farther towards this radically different view. According to Shapiro, these “natural genetic engineering” processes deserve further study. “Genomes aren’t just read-only databases but read-write. And this change is not slow, but episodic. The structure of a chromosome can change, or many sequences of DNA can move about within a generation,” he explains.

Shapiro’s radical embrace of this modern theory, based on the molecular evidence he’s observed, has made him somewhat of a controversial figure in the biology field. He asserts that this understanding has ramifications for cancer treatment: tumor cells can quickly ‘evolve’ resistance to cancer drugs, so strengthening a patient’s own immune system and only using the minimum necessary dose of chemotherapy would help curb that evolution.

Also, this new theory suggests that we need to be very careful about how we treat humans’ exposure to disease-causing organisms and cautious about pesticide resistance in agriculture. When we have a bacterial infection, we are often prescribed antibiotics. This stresses the bacteria and is typically fatal for them. However, most pathogenic bacteria now have the ability to survive antibiotic treatment and pass that resistance gene along to other bacteria. The surprisingly rapid evolution of multiply antibiotic-resistant bacteria has created a situation where we need to find new ways to combat these infectious disease agents.

Shapiro is a dedicated science communicator because he believes that understanding evolution isn’t just necessary for scientists, but for everyone. To him, the theory reaffirms our connection to other species.

“Evolution is fundamental to who we are and to life on this planet. When we grasp that we’re natural organisms who won’t be taken away in a deus ex machina rapture before things get too bad, we can get down to the business of solving our environmental challenges,” Shapiro explains.

To him, science communicators play a critical role in educating the public.

"Of course the public needs scientists and science writers to get out there and reach them! Just look at what's going on in today's society, on how even things like evolution are up for debate!" he says.

He points out that there’s still a whole lot we don’t understand about genetics. He explains we need more complex models in evolutionary biology research that go beyond examining single species pure cultures in vitro.

“We can’t just look at organisms by themselves anymore, that’s too simple. All organisms interact within a biosphere. It would be more useful to study petri dishes with mixed cultures, or bacteria together with viruses, to see the evolutionary change,” Shapiro suggests.

One major misunderstanding in our recent past was that not too long ago, we thought that two-thirds of our genome, which doesn’t code for proteins, was nothing but inactive ‘junk’ DNA. Now, we are beginning to understand that many of these sequences encode RNA molecules that regulate development or serve other functions within the cell.

“Dawkins’ ‘selfish gene’ idea, that sequences of DNA within an organism’s genome were competing with each other like organisms fighting for scarce resources, and that each sequence ultimately sought only to replicate itself, was actually incorrect,” Shapiro says. “Not everything in nature has to be about perpetual conflict and the survival of only the very fittest. There’s quite a bit of cooperation among the parts of a genome and among different organisms, starting when tiny cells fused to become the eukaryotic cells of modern organisms because they could survive better together than apart.”

Shapiro believes that this more complex paradigm for evolution will lessen the chance that the philosophies inspired by it will lead to racism and eugenics. “The ideas that we shouldn’t care for the supposedly ‘weak’ among our populations, that some people are inferior and less genetically ‘fit’ and worthy to live, come from popular misconceptions of evolution, not the science itself.”

Thank you to James Shapiro for his time discussing his ideas and new book with us.

Cristina Deptula is a literary publicist and the founder of Authors, Large and Small. She also serves as a staff writer for UC Davis’ College of Engineering and covers biomedical and electrical and computer engineering stories.

James Alan Shapiro is an American biologist, an expert in bacterial genetics and a professor in the Department of Biochemistry and Molecular Biology at the University of Chicago. He says that if he were to write another book, it would be entitled Why Evolution Works As Well as It Does.