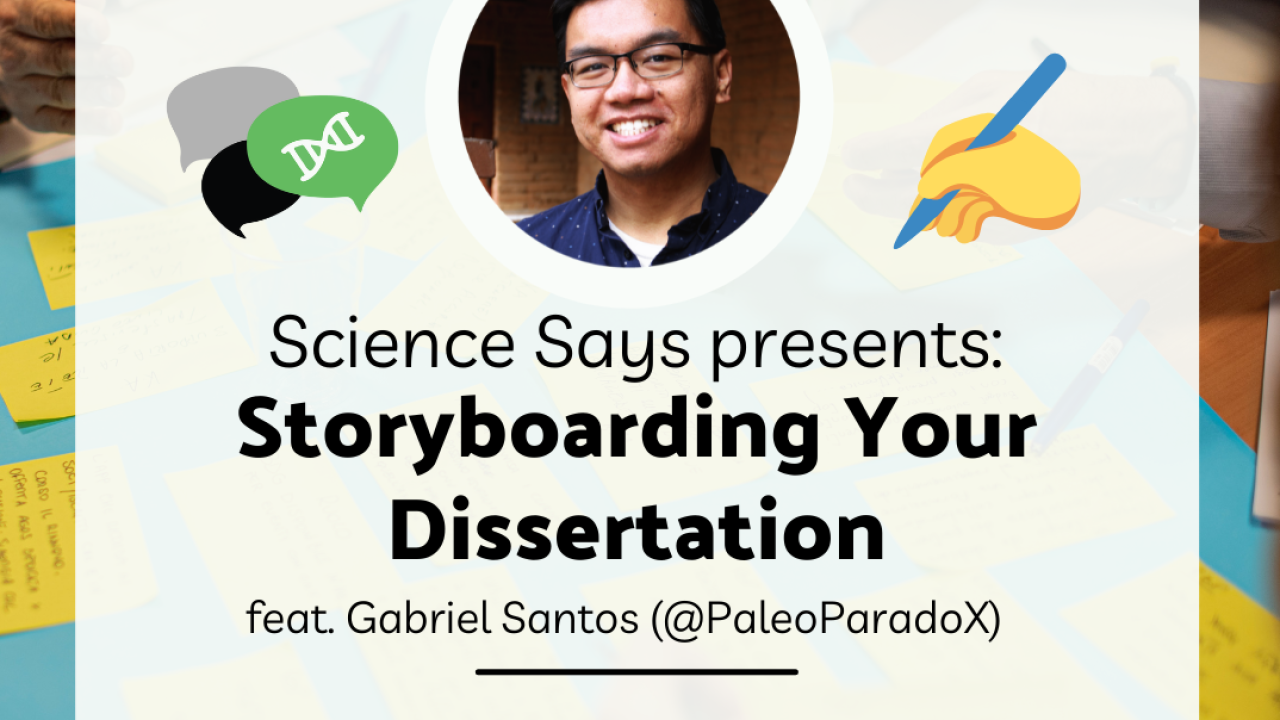 Storyboarding Your Dissertation with Gabriel-Philip Santos

One of the most effective ways to communicate science is through storytelling. For the last Science Says event of 2021, Gabriel-Philip Santos taught us how the tools of storytelling can be used to effectively share scientific ideas. As a scientist himself, Gabe firmly believes that all scientists can be successful storytellers. In fact, the very first scientific story Gabe shared was from his master’s research focused on marine mammals and paleoecology. Gabe has continued to build his storytelling ability as a paleontologist and educator at the Alf Museum of Paleontology in LA and as a cofounder of the Cosplay for Science Initiative.

The process of science and scientific data can be structured to fit a narrative and there are many historical examples of stories being used to explain scientific ideas. Many myths and legends are actually examples of ancient people working to understand the natural world prior to modern science. In an example of a myth telling a scientific story, Gabe explained how ancient Europeans called sea urchin fossils “thunderstones” because they were commonly found on the ground after storms. It was believed that the thunderstones were the heads of lightning bolts hurled down by the gods during storms. As a result of this belief, “thunderstones” were commonly placed in the home to protect from lightning. The myth of thunderstones is an early explanation for erosion revealing sea urchin fossils during storms. Scientists are realizing how important it is to recognize that not all scientific knowledge is shared in the same way. Technological advances have shifted the manner in which scientists observe and explain the natural world over time, but it remains important to recognize scientific stories that may take different forms. Traditional Ecological Knowledge is an essential way that scientific knowledge has been shared through stories over time. To preserve traditional ecological knowledge, there is a growing movement focused on working with aboriginal scientists to improve the scientific perspectives of the natural world and teach science better.

The process of fitting science to existing popular culture narratives can be an effective way to connect people to science and spark their curiosity. At the Alf Museum, Gabe fit the evolution of mammals into the framework of Star Wars to create “Nature Wars: the Rise of Mammals” which framed mammals as the rebels working to beat the odds against the dominant species at the time: dinosaurs. Many people already feel a personal connection to Star Wars and utilizing that connection allows for people to then relate to the scientific topic. Another fun example was using different plant pokemon to teach about plant biology. Thinking about how your research can be connected to different popular culture narratives can be a useful way to connect a broader audience to the science you want to communicate.

As part of the workshop, the goal for participants was to shift from being natural storytellers to conscious storytellers. Storyboarding is a useful tool for active science storytelling and understanding the overall message to be communicated. When storyboarding a dissertation chapter or a talk, the general basics of storyboarding should be followed. A storyboard begins with a short list/outline that is then filled in with sketches, important details and context. For a dissertation chapter, you may feature a panel for your introduction, materials and methods, results and discussion. Each section of a scientific paper can equate to a portion of a traditional narrative structure. For example, a traditional narrative structure starts by setting the scene and the introduction to a paper can be viewed the same way. A useful tool for storyboarding is a productivity database called Notion. Notion allows different components of a storyboard to be stored in one location and quickly organized and edited. Compared to traditional outlining methods, storyboards include the entire arc of a narrative from start to finish in easily maneuverable pieces. Using storyboarding for communicating scientific ideas can be very useful because laying all sections out from start to finish improves coherency and flexibility which leads to strong narratives.

Thank you to Gabe for teaching us about scientific storytelling and storyboarding!

Andi DeRogatis is a graduate student at UC Davis in the animal biology graduate group. She is currently studying how the avian immune system is influenced by the process of molt. She loves all things birds and is passionate about getting others excited about birds as well! You can follow her on Twitter @AndiDerogatis.