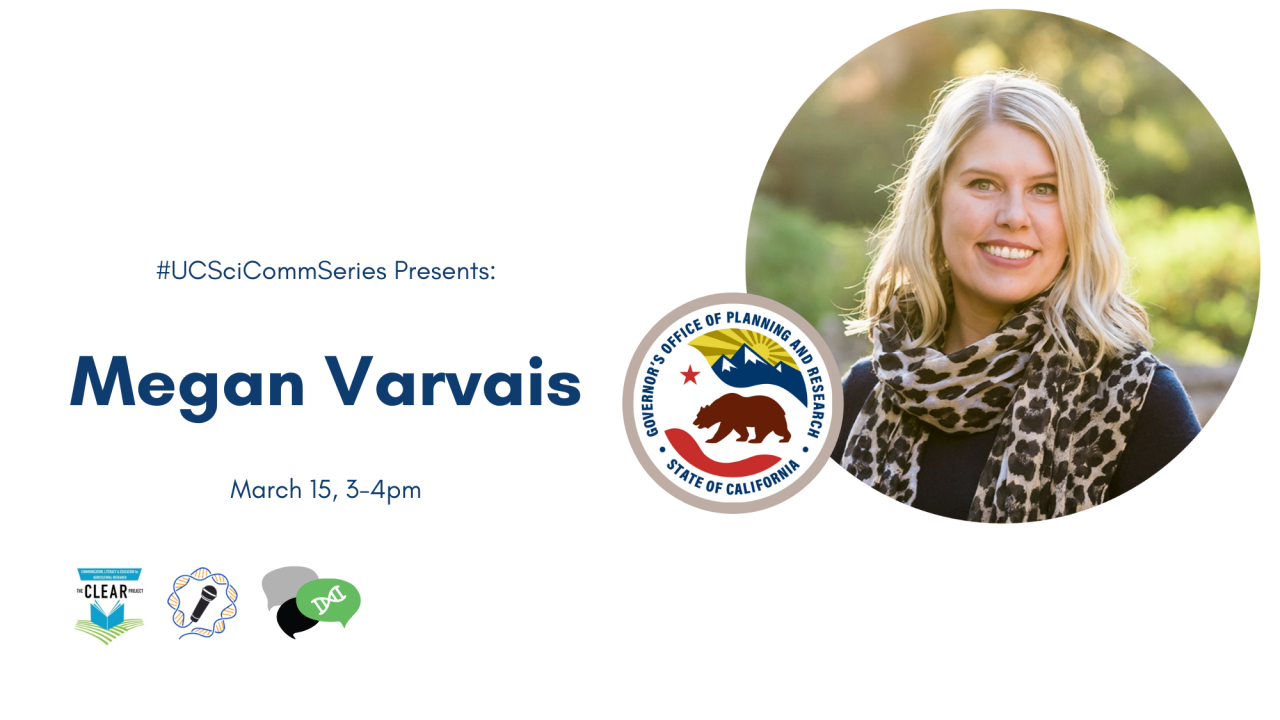 Megan Varvais, Communications Specialist and Administrator for the California Initiative to Advance Precision Medicine at the Governor’s Office of Planning and Research, talked to us about her journey from legislative advocacy to her current position. She started her career working in non-profit legislative advocacy and organization for various political groups.

She also served as an elected delegate to the state party for two years. In these positions, she learned graphic and web design and other data visualization skills. She noted that she believed she needed to be an artist before jumping into a design role, but with current technology such as Canva, anyone with an eye for design can create art.

When she was 23, she moved from the Bay Area to Sacramento where she entered the legislative world working for a contract lobbyist. This was where she realized that she could affect policy change without holding office. She later worked with the Consumer Federation of California, Consumers for Auto Reliability and Responsibility, and other political organizations.

In 2018, Megan became the first person in her family to graduate college and applied to the California Initiative to Advance Precision Medicine (CIAPM). CIAPM is the only state-level precision medicine initiative started by former governor Jerry Brown. Housed in the Governor’s Office of Planning and Research, CIAPM works in partnership with other state agencies to promote precision medicine research. At CIAPM, Megan has designed the CIAPM Asset Inventory, the first-ever California Surgeon General’s report, the website, social media graphics, reports, and many more CIAPM products.

Megan explained that some useful skills she brought into her position included experience communicating with elected officials, management, learning new software, making information interesting, and digging into topics that she may not be familiar with. Other skills she needed to learn included communicating with academics and distinctions between scientific and medical terms. In her current position as communications specialist, she enjoys the challenge of translating science to the general public.

She concluded the talk with some advice for translating academic writing to most other forms of writing, such as, avoiding complex sentences, making the point clear as soon as possible, reducing the number of modifiers, using active voice, and most importantly, writing at a 5th-7th grade reading level. Regarding how to avoid passive voice, Megan emphasized to “learn to be your own overworked, merciless newspaper editor who does not have time for this.”

To improve the readability of your writing, use less jargon, do not substitute accuracy for oversimplification (this is a disservice to readers!), and only include one idea per sentence. One useful resource for writing for the general public is plainlanguage.gov.

Here are a list of resources that Megan provided:

Hannah Chu is currently an Entomology PhD student at UC Riverside. Her research focuses on blow flies in Southern California and their thermal adaptations in the face of climate change. You can find her on Twitter or her website. For more content from the UC Riverside science communication group “SciComm@UCR”, follow us on Twitter @SciCommUCR.