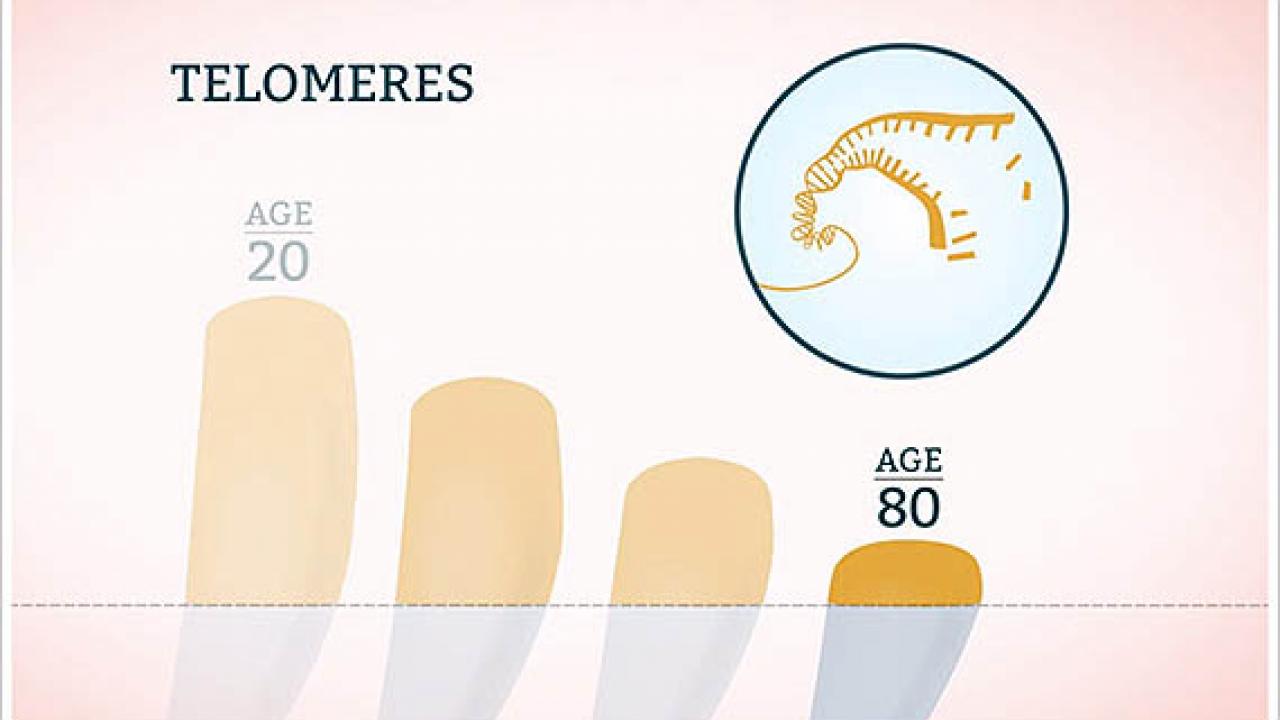 Fertility and Fraying Tips: What Does Your DNA Say About When to Have Kids?

"Having kids in your 30s has an amazing effect on your DNA..."

"Want to live longer? Give birth in your 30s"

The headlines are seductive. I immediately wanted to print them out for my grandchild-less mom. Too bad they're not true. After looking at the study these articles are citing, here's what the science really says.

First, aging is complicated. There are literally a lifetime of variables that compound, interact, and eventually contribute to our age of death. There are entire fields of research dedicated to studying how to live healthier for longer periods of time (like medicine!). The 2009 Nobel prize in medicine was awarded to scientists who cleared up a major question in aging research. How does DNA protect itself during cell division? The answer is telomeres.

Telomeres are repetitive bits of DNA that protect the ends of tightly wound strands of DNA called chromosomes. Each new round of cell divisions shortens the length of the telomere. To understand why, it might help to imagine the vast rounds of division the cells in your body undergo throughout your lifetime. Your stomach cells divide and completely replace older cells in just a couple of days. Your liver cells turnover every 10 to 20 days (thank goodness).

In fact, the majority of your cells are in constant flux. Dividing and growing, dividing and growing every second. Each time one of your cells divides, it has to copy its DNA. Given how often this happens it makes sense that the ends of the DNA strands might start to fray. A telomere is to a chromosome what an aglet is to a shoelace. Over time chromosomes, like shoelaces, can fray and splinter. Chew a little bit and maybe nothing happens. Chew too much and problems arise. Telomeres don't include important genes so you can gnaw more of them and the cell still runs okay.

Like our own version of tree rings, short telomeres are an indicator of old age. Researchers studying telomere length and longevity noticed telomeres fray less in some individuals who live long healthy lives. Indeed, some centenarians (people of 100+ years in age) have similar telomere lengths to those in younger generations.

The researchers of the study mentioned in those catchy headlines were curious to see if there was an association between telomere length and fertility. They found that mothers who gave birth at older ages were more likely to have longer telomeres than younger mothers. In fact, the oldest mothers had the longest telomeres.

I want to stress the words "more likely" in the above paragraph. There is an association between long telomeres and the age at which one gives birth, not a direct link. I'll invoke the famous "correlation does not equal causation" phrase here, which means just because two things are observed together does not mean that one causes the other. Wearing a raincoat might be correlated to more car wrecks but wearing a raincoat doesn't cause car wrecks and car wrecks aren't why you put on a raincoat. The headlines suggest waiting to have children will make you live longer. More likely, women already apt to live longer remain fertile later in life.

As the scientists are careful to admit, there are several limitations to this study. First, their measure of prolonged fertility is the age at which the mother had her last child. But of course, not having a child does not mean that the mother is infertile. The study did not include other types of pregnancies that may not have resulted in a surviving child (ie. miscarriages, still-births, etc). The age at which a woman decides to give birth is also varied, personal, and influenced by a myriad of things. The researchers mention environmental and social factors such as economic status and familial relationships that factor into the decision. Finally, the participants of the study were all non-Hispanic white women, but populations differ in the length and stability of their telomeres. Given what we know about telomeres and their impact on aging (long telomeres = more likely to live longer) and the conclusions from this study (prolonged fertility = more likely to have long telomeres) we can cautiously conclude that prolonged fertility might be a good indicator that the mother will live longer. Here's a diagram to help: 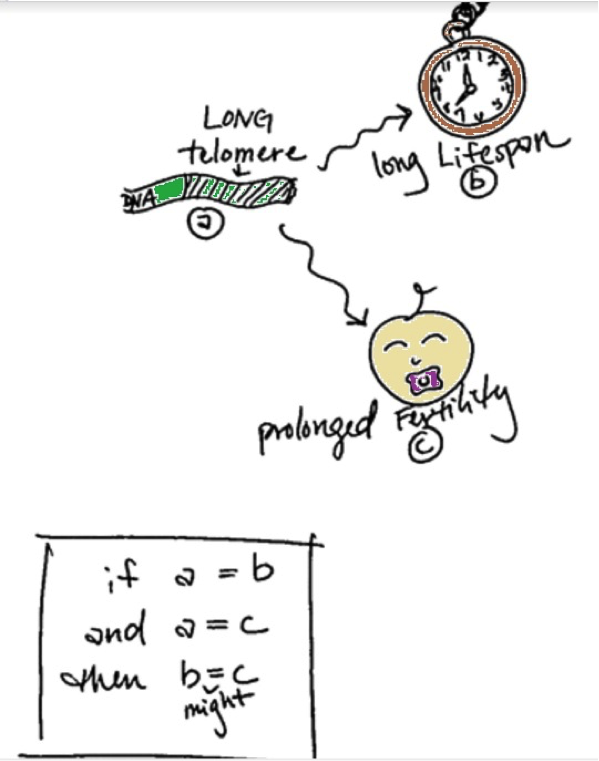 The significant association between maternal age and telomere length is interesting because it means there might be a genetic basis behind fertility and longevity. Because of the genetic component, you can see similar effects in blood relatives. So keep an eye on your siblings. All in all, having good DNA (or long telomeres) could be the key to living longer. Having good DNA could mean that you stay fertile for longer too, but deciding to have kids later in life won't make you live longer. The headline should read, "Good DNA has an amazing effect on your fertility." But as any good scientific research study usually ends, more research is needed.

A last word of advice, use protection when replicating.

Destiny Davis (author), Caryn Johansen (editor), and Jordan Snyder (editor) are PhD students at the University of California in Davis. This post was written as part of a project called "Science REALLY says" which seeks to ensure scientific data is accurately represented by the media. For more content from the UC Davis science communication group "Science Says", follow us on twitter @SciSays and like us on facebook.