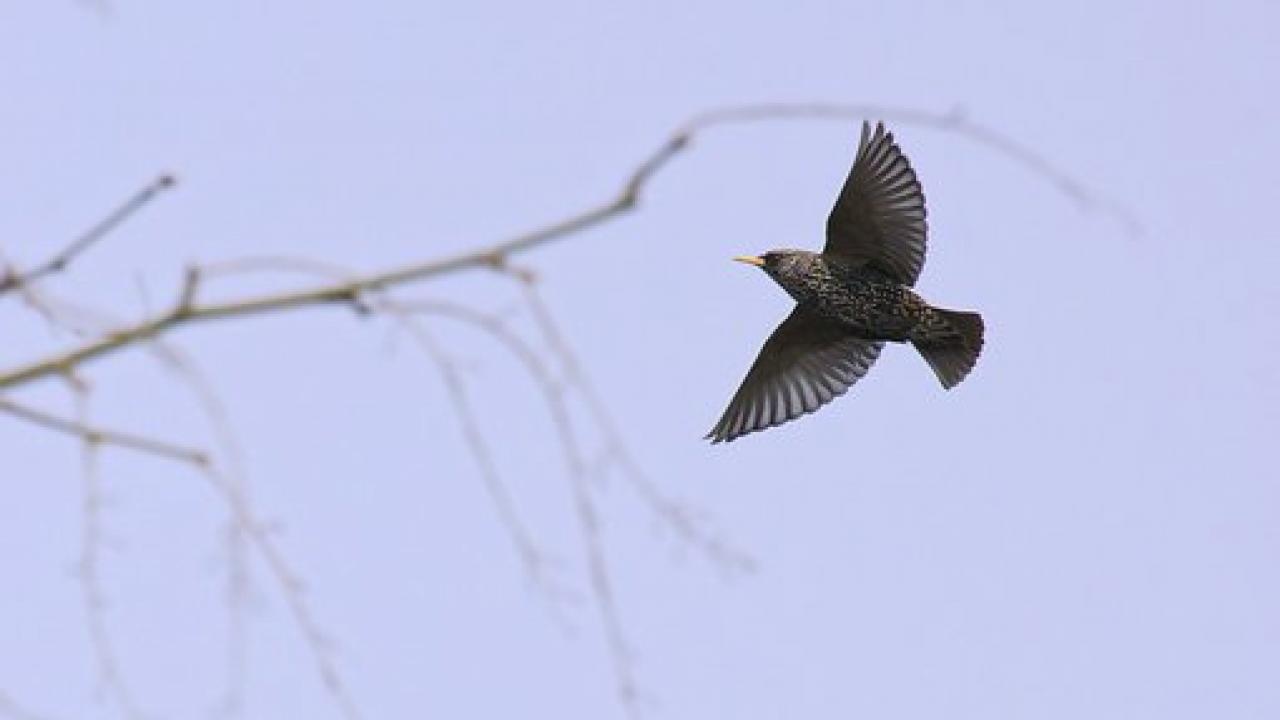 What A Bird Needs

Taking a shot at better chances of survival, songbirds encounter stress. Long-distance migration is one of these stressful survival mechanisms. When birds are stressed, their bodies begin to produce hormones (glucocorticoids) which are meant to help the birds cope with stressors. But they become problematic when produced for too long. “Glucocorticoids are beneficial in the first stage [of responding to stress], risky in the second stage and can be deadly in the third stage,” said Stefania Casagrande, the lead author of a paper published this year in the Proceedings of the Royal Society B.

Along with an international research team, Casagrande investigated the effects of anthocyanin on the way European Starlings (Sturnus vulgaris) respond to stress during their migratory flight. Anthocyanin, an antioxidant found in dark purple berries (such as bilberries, cranberries and blueberries), equips European Starlings to deal better with stress on their difficult migratory journeys. The researchers collected European Starling chicks from nest boxes at the Max Planck’s Institute for Ornithology, Germany, and hand-raised them. After putting them through endurance training for two weeks, they divided the birds into two groups and fed them with the same diet which consisted of  insect powder, lettuce, fruits and mealworms. One group was additionally fed anthocyanin supplements while the other was not. Then the researchers simulated migration in a wind tunnel and measured the amount of stress hormones in the bodies of both groups after flights of up to six hours.

The study revealed that the long flight raised the level of stress hormones in European Starlings. It also showed for the first time that anthocyanin-supplemented diets reduced the level of stress hormones in birds that had just completed a long flight, compared to birds that had not been fed with anthocyanin. Anthocyanin in particular may be a limiting factor for successful migration in this species, as it is water soluble and cannot be stored in the body. Therefore, it is required to be available while they are migrating.

There is a delicate balance between the survival of migrating birds and their environment. Therefore birds are more at risk in a rapidly changing environment. For example, if some migratory birds knew they could find berries containing an important nutrient or antioxidant on a particular island, it would be disastrous for them to stop there on their next journey to find that a resort has been built for tourists, and the berries they need so much are gone. Rapid changes in the environment expose birds to even more stressors and make it increasingly difficult to cope. Thus, Casagrande advises, “We should be careful about this when we alter the environment.”

Dr. Chima Nwaogu, who was not involved with the study, thinks the experiment was valuable for understanding the importance of a particular dietary antioxidant for regulating glucocorticoids in a migratory bird species. He thought it beautifully described the non-fuel costs of migration for birds. Birds don’t only gather fuel (energy-giving foods) for migration, they also prepare for the oxidative stress involved with migration, and to maximize the use of the energy they have accumulated in fuel reserves for flight. This highlights the need for “maintaining habitat heterogeneity [as many different types of habitat as possible] and knowing exactly what the birds need to perform migration efficiently” because “birds select what they need,” said Nwaogu. But what if what they need is not available?

When setting priorities for managing habitats and creating new ones via reforestation, we have to consider the dietary requirements of birds and other biodiversity, and put the right plants in place.

Esther Nosazeogie is a conservation biologist and science writer based in Lagos Nigeria. She is also a member of the WildLens Collective (http://www.wildlensinc.org/). You can find her on Twitter (@ENosazeogie), and on LinkedIn (Esther Nosazeogie). For more content from the UC Davis science communication group "Science Says", follow us on Twitter @SciSays.